Just before Thanksgiving, I wrote about the pleasures of playing with words. Apparently, getting-together times put me in mind of folks with whom I’ve savored our fabulously mongrel language.

I don’t want to slander all those other languages I’ve tried to learn but can’t speak worth beans. Still, I’m here to testify: I love English, with its many origins all braiding together into a zillion ways of saying almost anything, and its individual words revealing themselves as artifacts of long grassroots change never legislated and rarely neatened. It’s a mess, our language. Hooray!

The syllable game I described in that post can be a way of peering into a word’s history. It’s like sending off a sample of your blood to find out which long ago human voyages came together to be you. A look into the dictionary, to check on syllabication, can reveal aspects of a word’s genetic code. What other words are related? What parts does the word share with other words? If you’re using the kind of dictionary that gives information about a word’s origin, you can really trace your word’s genealogy.

The Syllable Game is particularly good at getting kids to see a word simultaneously as a whole and as its parts. That’s a crucial skill for future reading about history, geography, politics, sociology, or any sort of science. If you can’t break a word apart for help pronouncing and understanding it, you won’t be able to connect the word on the page or screen with the word you’ve heard in class, or the related words you already know.

Many word games help the player notice the ways our language is modular, like Lego, composed of small units that get combined–and that’s part of its genius. English is a good language for describing the world, because a word can be prefixed or supplemented to become more accurate. Like the mental flexibility that let early modern humans solve problems all over the planet, English is an open-minded toolkit, with an ability to morph that lets us all speak more clearly, whatever we want to say.

Deborah Melone, a fellow member of Every Other Thursday Poets, introduced us to Harry Matthews, who taught us a number of word games designed to get folks started writing. Teaching them, in turn, to my students, I discovered that these games work well for kids.

A Scrabble dictionary can be a great help here.

It’s fun to reconcile opposites, but they both have to have the same number of letters. (There’s no way of changing night to day in this game.) Wet to dry seems like it’s going to be hard, but here’s one way: wet, set, sat, say, day, dry.

The words don’t have to be opposites, though. Going from crow to hawk is tricky, because vowels and consonants change position in the words. When I tried this one, my ladder list was fun to write from, embedding each step in the ladder in a new line of a poem–a poem that lured me into territory I wouldn’t otherwise have explored. That was Harry’s point.

It’s also fun just to play open-endedly, and see where you arrive. Watch for the words that are dead-ends, and think why. You can always backtrack and keep going.

Or experiment to see: what’s the limit on word-length that can work within these rules? Can you do a ladder of six-letter words?  Ladder / sadder / sander / sender…  There must be some way to get away from that er.

Deborah became a brilliant practitioner of another Harry Matthews word game: the snowball poem. Here’s one of hers, from our anthology Something Understood, published by Every Other Thursday Press:

I just noticed a place where this breaks the rule, which is to add or subtract just one letter per line. (It’s always lovely to have proof that rules are meant to be bent.)

One of my former adult students, Chuck Jackson, started a snowball poem like this:

I’d give anything to find the piece of paper with the rest of that.

Here’s another game I invented myself, which can be played solitaire or with a partner. You need a dictionary that really works for the kid playing, that isn’t too fancy.

The first player just starts with a word that is likely to have an interesting definition.

The second player looks up the word. Let’s say my partner just gave me the word solstice. I’m using the student dictionary at Merriam-Webster’s wordcentral.com, and I find this definition:

Function: noun
1 : the point in the apparent path of the sun at which the sun is farthest north or south of the equator
2 : the time of the sun’s passing a solstice which occurs on June 22nd and on December 22nd

As the second player, I get to choose a word from that definition, and I’m going to choose equator.

My partner looks this up, and he and I go on a little detour over the idea of the celestial equator, but he decides to stick with the definition of equator, from which he chooses the word imaginary.

When I look that up I choose unicorns. And so on…

When students play this together in class, or with an older person at home for homework, I ask them to list the words, with just brief versions of the definitions from which the word for the next turn was taken. It’s important to ask kids to do some recording, I think, and equally important that that not be so onerous as to eliminate the fun.

Debriefing, I’d have each student tell us about one word on the list new to him, or a word that she’d like to use in her writing.

Actually I’m not really going to write about this now– I’m going to stick with my self-imposed word count target, for once. But here’s a photographic preview. (This is like Jeopardy: What was the direction?) 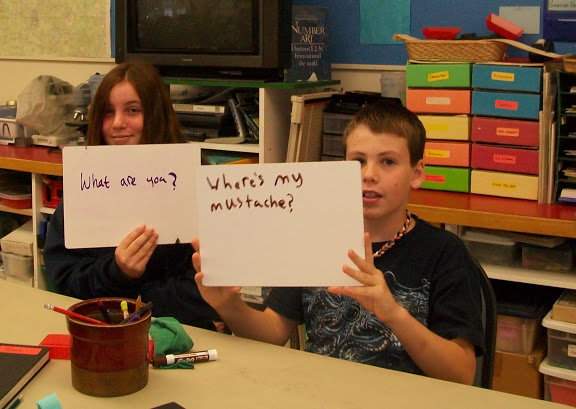