In the end, it’s not really the topic of grades that’s so huge for me— It’s the topic of no grades: what can happen, what I’ve seen happen, in their absence.

This is Julia Miller, who graduated from Touchstone long enough ago that she’s about to graduate again, from high school. Behind her, draped on the greenhouse, you can see the flag her Older Student Program group made the previous fall, just before going on their fall hiking trip. If you look closely, behind Julia’s right elbow, you can see the word CREATIVITY and the beginning of the word RESPONSIBILITY—two of the values that group chose as their watchwords for the year. She’s about to dance– 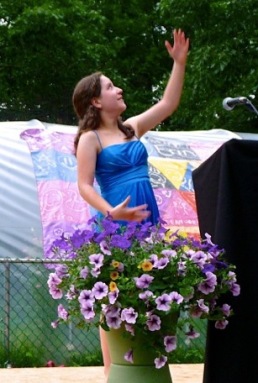 –mostly as a joke, but I love the way this photograph shows her blooming along with the petunias, and reaching for the literal and figurative skies.

As they go through their experience, students in an ungraded situation aren’t thinking, “no grades no grades no grades.” They’re making connections from topic to topic and theme to theme and school to home (and vice versa); they’re trying out different voices and different genres and new strategies for understanding the world; they’re thinking a lot about the community of each other.

Teachers who aren’t giving grades aren’t thinking “no grades no grades no grades.” They’re making connections themselves, learning about their topics, watching and planning for ways to include other adults and experiences outside the classroom; imagining the world of each student from inside that student’s perspective; nourishing the community that can do more for each individual than any teacher’s plans.

As we went along, the missing grades barely figured in what I said about the teaching and learning I shared with each year’s class. At parent meetings, I never said, “First, I want you to know that I’m not giving grades.” It was taken for granted, invisible.

Still, that absence of grades was constantly at work in the presence of other energies and outcomes.

Now and then, a transplant–or his parents–couldn’t make that transition. Most were like people woken from a long and troubled sleep. They stretched; they looked around; slowly, or quickly, they became active, in a new way, in the scene of their lives.

Still, I don’t have available the experimental control, in which the same teachers worked with similar kids and gave grades. I don’t know how that would have worked for any of us.

Close friends have said that I would probably have blown all my fuses and quit; that I would have left teaching very early in the game, if I’d been forced to translate my students’ growth and learning into graded assessments.

I wonder: how many teachers have been driven out of teaching by the necessity of an activity ultimately so alien to their original hopes and intentions? How many others, not questioning grades, have nonetheless abandoned teaching out of disappointment with the state of mind grading has induced in their students? What have we lost with this attrition, these departures?

My own history meant that I didn’t take the absence of grades for granted. I first started questioning the effectiveness of grading long before I was a teacher, long before my husband and I went looking for schools for our children. I became skeptical of grades at a time when I was being graded myself, and getting good grades. Not always, but sometimes, I could feel how addictive that was; I could glimpse how few risks I was taking; I felt, often, the price of that labeling.

Beyond that, I remember watching the effects of grades on some of my friends. I knew their talents and strengths, and wondered why their grades didn’t represent them more accurately. In fact, there didn’t seem to be any way for some of my friends to live in their strengths, in the classrooms we were encountering. Looking back I can see how the learning was often shaped to be easily measurable, easily graded.

If you’ve read previous posts, you know that I had some wonderful teachers. I don’t blame them individually. I was in the first wave of the post-war baby boom, and our classes were large. To some degree, increased testing and grading pressure attempted to manage that suddenly increased demand.

Like them, still, many teachers don’t have a choice of not assigning grades. Some give the grades they have to give, but play down the importance of those grades in any way they can, putting their energy into those other products and outcomes I tried to describe in the previous post:

One of those “teachers without a choice” lives under the same roof with me, and his frustrations were part of what finally goaded me into writing about not giving grades. So I want to end this series of posts, at least for the time being, with a nod to him and to all those teachers past and present, saddled with the obstacle of grades and making the best of it, for their students’ sake.

I think I’ve said this before, and I never forget it for a minute: I was lucky.

But that’s enough (finally, or at least for now) about no grades. Next time, I want to start thinking about structures to help teachers and students meet each other halfway, beginning, I think, with the seasonal feast of the Skimathon!