After my first post about learning styles appeared, I heard from a number of past students and their parents, who affirmed the good things our learning styles work had done for them. I’m so glad!

I also heard from Anne Powell, coauthor of the book that’s been my learning styles bible, How Your Child Is Smart. Annie said, “Write more!” and then filled me in on some of the ways the terminology has continued to evolve. For example, Dawna Markova’s approach to the subtleties of individual learning, what we called “learning styles” in my class, is now more commonly referred to as “Mind Patterns.”

I love that term, mind patterns. It evokes streams braiding together in a delta, or lines of music, or people dancing to weave the ribbons of a maypole–or the braiding together of different states of consciousness, in the way we do almost anything.

All the illustrations for this post come from my archival set of learning style posters. For each student, we brainstormed evidence in a class discussion, and I took notes (in apparently very variable handwriting) to help the class keep track of what had been said, and to create a recording of the discussion that could be given to the focus child.  For each poster, I’ve cropped off the name at the top, and also the letters representing students’ hypotheses about Mind Patterns that could fit the evidence.

All day long you cycle among different states of mind, with various kinds of alertness to your surroundings, or attention to your own internal processing.

These three states of mind, described much more fully in How Your Child Is Smart, have become increasingly associated with brain wave patterns, in the ways Mind Pattern people talk about them.

(I’m simplifying this considerably, to get where I want to go with it.)

The Mind Patterns schema also thinks about types of experience, both receptive and active.

Mind Patterns analysis says that these three states of mind (conscious, subconscious, and unconscious) and the three realms of experience (auditory, visual, and kinesthetic) tend to interact in interesting ways, triggering each other. Nothing’s absolute, but for each of us visual experience, for example, tends to trigger a particular state of mind. Also, given a new experience, each of us tends to process it in a relatively predictable pattern or sequence. 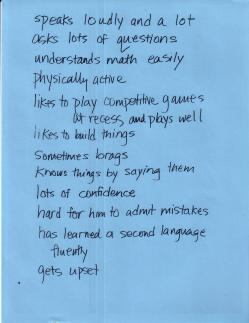 Another italics interruption, to marvel at these recordings of kids’ comments about each other. Some comments are pretty blunt, as in “sometimes brags”, to the left. (I’m surprised I wrote that down–it’s possible that the kid himself said it!) Overall, though, the comments are both astute and kind. Within our community, we regularly affirmed that none of us were perfect, that all of us were figuring out how to be both true to ourselves and respectful of others. Reading the posters, I’m struck again by the safety these kids created for each other.

In class with my students, when I got to that point, having explained the three kinds of consciousness and the three realms of experience as seen within this schema, and having gotten the kids to help me list examples within the categories, I wanted to help them see how it all comes together, and sometimes I began with myself.

By the time we were doing this–never at the very beginning of the year, in spite of public demand–the kids knew me pretty well. They knew that my ability to see what was happening in the entire room could be kind of spooky. They knew that I wanted to see their faces while I read aloud, so I had learned to grab big chunks of print in quick looks down at the page. They knew that my particular kind of visual attention let me do that back-and-forth, back-and-forth, between the print and their faces, almost any time–unless I was too tired or too emotional about the book.

They knew that I tended to process anything unresolved by talking or writing about it; or getting them to talk or write. They knew that I depended on hearing every voice in the class–which meant side conversations within a group meeting could throw me off. I wanted to hear everything, but I couldn’t sort and organize what I heard as quickly or comfortably as with visual information.

They knew that active kinesthetic experience was exciting for me–bicycling! canoeing! building things!–but often a little out-of-control. Almost everyone talks with their hands. I talk with my entire arms, and bystanders have been known to look for helmets. I’m trying to sketch, in the air, the thing I’m talking about, to make it visible, and that can get messy.

My students had also experienced me as a person with very strong feelings, sometimes surprising to myself, revealed to me, often, only by the intercession of language. 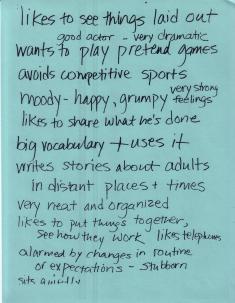 None of this is about what I like most or least, or what I do more or less well. It’s about relationships between states of mind and kinds of experience.

Like each of the six patterns, VAK has many variations, and it has its ups and downs. VAKs drink in the visual world, and love to create things to be seen. We tend to be eager and compliant students, for whom the traditional classroom setup actually works pretty well. In an active classroom, we can easily become overwhelmed by kinesthetic experiences and demands–but they are really helpful for us, long-term, if we’re given support from our friends.

Reading the advice for parents of a VAK child, in How Your Child Is Smart, and reaching a part about helping your VAK child understand “how long it takes her to do anything,” I burst into tears. “Oh,” I thought, “if only they could have!” They were doing their best, like most parents. Still, if they’d known how to help me understand my slowness, I might have avoided years of considering myself useless for anything practical, that really mattered.

Here’s the fundamental fact: no one of us can be everyone.

So we put up big pieces of paper on the walls of the classroom, and brainstormed what we had noticed about each student’s patterns–with the focus child getting to put in his or her own two cents, with huge competition for who would be next, with gradually increasing clarity about the whole business. It was fun–

–and it was also an indispensable part of what our school called “the social and emotional curriculum.” As we explored these ideas together, kids could discover and experience for themselves, in a very direct way, Markova’s and Powell’s central insight: there are many ways to experience the world and join in its creation.

In the previous post about our learning styles work, I wrote about the ways my understanding shaped my teaching, my sense of individual needs, and my sense of appropriate (and sustainable) ways to respond. (Short version: I invited them in, to be “their own best teachers.”)

The learning-styles work was never about alibis, giving kids reasons to try less hard when faced with challenges. All of us can grow and become more balanced versions of ourselves, more receptive to the insights that aren’t native to us, more active in ways that take greater effort or practice.

Still, none of us should be made to give constant attention to what is challenging for us. We need to encourage each other–in schools, in our families, in our workplaces, in our communities–to live in the happy momentum of our strengths, to give with joy whatever is ours to give.