I’ve written before about Marjorie Weed, at the end of the post “In Praise of Colleagues.” But now I’ve got a photograph.

When Mrs. Weed retired from teaching art to high school students, one of her alums–having become a Touchstone parent–recruited her to come to Touchstone as a volunteer. Marjorie agreed to try teaching younger kids, on the condition that the classroom teachers would stay with their classes during their art sessions. She didn’t want to have to fuss over behavior.

Oh happy condition! My students didn’t need much fuss at all, so I almost always did the project of the day along with them.

I learned a lot about art and the making of art, much more than I can summarize here.

I also learned about my students, watching them explore Mrs. Weed’s suggestions. Here’s a favorite memory: Harry, painting, saying things like, “Oh! I didn’t know that would happen! That’s so cool! What if I try… This is terrific…” With a burbling stream of running commentary, he cheered himself on. In years to come, faced with one of those kids who kept running down his own efforts, I would attempt little imitations of Harry, making it clear that Harry was way cool, a model anyone could be proud to imitate. (You can definitely try this at home.)

Meanwhile, I also learned about myself. Visually I’m too conscious; the best assignments for me thwarted that, pulled the rug out from under me, made accurate representations impossible. When Mrs. Weed said, “Watch for happy accidents!” she was talking to me along with the kids.

I can also get carried away with the fun of making something, and not know when to stop. In a terrible memory from second grade, we were finger painting, and I just kept adding color, more and more glorious color. It all turned to mud, of course, and the teacher threw out my paper. By contrast, Mrs. Weed would sidle up to me and say, “Don’t do another thing! You’re done!”

I thought she was a genius, and tended to obey. This was interesting for my students to observe.

So I’m thrilled to have unearthed a photo of Mrs. Weed. In this view, we’ve been wrapping plaster-soaked mesh around each others’ hands, and Mrs. Weed is getting ready to help remove one of the finished casts. (Maybe somebody else can remember what we did next, inspired by the photo.) 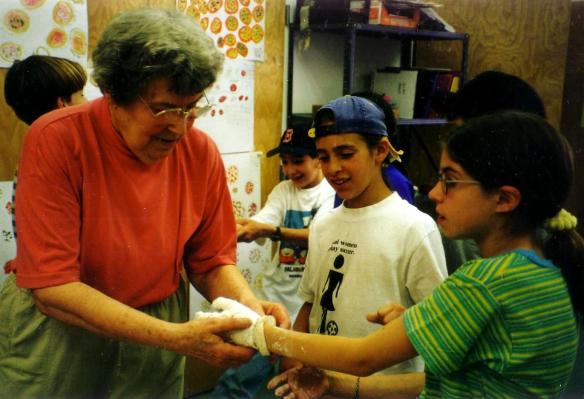 Marjorie Weed no longer teaches nine or ten classes a week, but she still shows up at school for guest appearances. Watching her in the last few years, I’ve tried to put into words, just for myself, her sense of what students need–but it isn’t about words. Her teaching behavior appears to be shaped by her sense that students need, more than anything verbal–and as quickly as possible–direct physical interaction with the materials of art: the heat of curing plaster, the textures of paper and paint and clay, the various ways of hitching two objects together.

In the private videos of my memory, instead of telling kids how to create a targeted product, Marjorie tended to set them loose in the exploration of a process. “Get messy!” she’d say. “Pay attention!”

Thinking about Marjorie Weed’s sense of what kids need, I went back into my notebooks, to find something I wrote before the start of school, in one of my earliest years of teaching. I wrote the original by hand, in a hotel room in Montreal, on a late summer trip with my family. Later, I kept photocopying the handwritten version to put it into each new year’s notebook. Here I’ve chosen to type it in italics, to show that I’m quoting that long ago person who was me.

Like any student work sample, this is a moment in time, in which I tried to distill what I was learning–from incredible colleagues, and from the incredible luck of working in a place where teachers could really learn from observing the kids themselves. Just a moment–but one of those moments to which I found it useful to return, again and again.

Thinking about the first weeks: What do the kids need–and what do I need–from those first days?

1.  They need a sense of WHO the class is, and who in the class will be friends for them, and how urgently they’ll need particular friends–whether the class as a whole will feel friendly, whether they’ll feel marginal or included, what patterns and formats there will be for interaction with each other and me. They need a sense, each one, that I’m going to like and appreciate and notice and understand them.

2.  They need a sense of WHERE–a sense of the room and what’s in it and what’s possible there, given the room as a micro-version of the world. How does the room interpret the world for them? They need to begin to know where to find things, begin to make their desks their own. [Later that became crates, when desks were replaced with tables.] They need to figure out traffic patterns, to carry an image of the room in their minds, if that matters to them.

3.  They need a sense of WHEN things will happen, especially because the schedule is different this year. [One way or another, it was different almost every year.] In the situations in which the sequence of their activities isn’t under their control, they need some sense of my reasoning and my own constraints. Where they do have control, they need to know the parameters and alternatives, and begin to sense their own priorities. They need to begin to feel the rhythm of the day so they can be in synch with it, and many of them need this in a visceral, unconscious, nonverbal way.

4.  At some point in each day, each of them needs:

Rereading that from my current distance, I’m struck by the intensity of the responsibility I perceived and accepted–and by the ways I already understood that the classroom community would share that responsibility, and grow in the process.

I’m also struck by the ways I had come to trust the nonverbal arrangements of the room and the schedule, the where and when, to support us.

From Ginny Scherer I had learned to support kids through structure in time, to plan the schedule as a rhythm, with changes that would support kids’ energy–times to take the world in, times to be expressive; times to move, times to be still.

I had watched De and Ginny use these nonverbal cues brilliantly, minimizing the need to intervene verbally in working with their five to seven-year-olds. Day by day and year by year, I was figuring out how to apply that with my ten and eleven and twelve-year-olds.

So, this post could also be titled In Praise of Colleagues: the Sequel. It could have a very long title: what a verbal person, a talker and writer, learned about how to use nonverbal cues more effectively while teaching, and how grateful she was for her teachers. (And how she could teach for another 25 years and still be learning those lessons.)

1 thought on “What Students Need”