On one of my first trips to Ellis Island, with my family, we were part of the annual surge of people into the national parks, on the day after Thanksgiving. (‟Highest attendance, nationwide,” the rangers told us.) 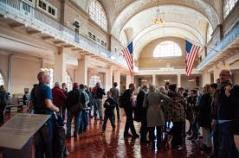 Moving from exhibit to exhibit in that throng, I overheard an older woman telling her companions about her own father’s journey to America, alone, at the age of 12. As she stood above the Great Hall, where people were sorted–allowed in or refused and sent away–stories she had heard all her life took on new shape.

On the ferry back to New Jersey, listening to all the languages around us, I leaned over to my husband and asked, ‟How many?” and he listened for a few minutes and said, ‟Maybe twenty?” We were surrounded by another pilgrimage, a pilgrimage of new immigrants, come to honor that shrine of the old immigration.

None of our own close relatives came through Ellis Island—his mother came after the island was closed; my ancestors, like the rest of his, came centuries ago, when nobody was counting or checking or manning the gate in any way; when people just came.

Still, the story we felt around us is universal—all those people, in all their languages, were saying so—and we were deeply moved.

The parents of my students helped me figure out how to get us there, from our distance in Massachusetts. The first time, Gail Epstein and David Tapscott arranged for us to stay with relatives near New York City, taking over their rooms in a giant sleepover. (Thus the comment–in the recording below, that shows part of our debriefing session once we got back–about not stepping on anyone.) 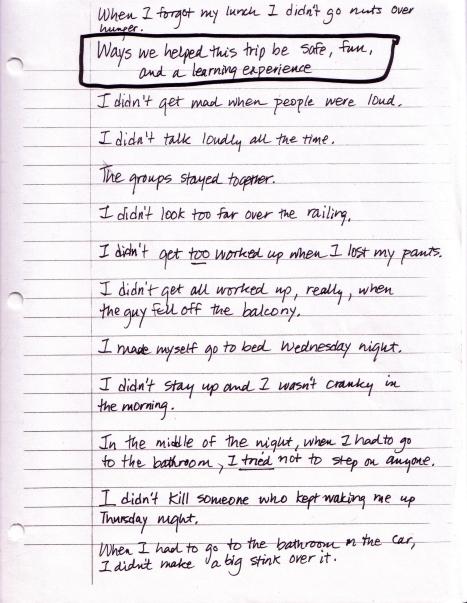 Another year, Carol Bedrosian, now the editor of Spirit of Change, arranged a bus for a day trip, and helped the class throw a car-wash to defray some of the costs. It was a very long day. We left from Grafton at 5:30 am, and returned about midnight. Still, it worked, and we used that way of getting to Ellis Island many more times.The trip book–a combined guide and workbook, the sort of thing teachers can create and use in the wonderful age of photocopying–included games to play on the bus. We chose a video to watch on the way home, and the few kids who didn’t pass out cold in extremely odd positions watched along with the adults.

The bus had more room than we needed, and cost a fortune, so we invited parents and grandparents to join us and help cover the cost. Making this a multi-generational field trip had all sorts of benefits. Kids got to know each others’ parents; parents got to know their children’s friends. Especially on the way home, as children slept, parents told each other (and me) their own families’ stories, deeply moving, often full of sorrow and darkness along with hopes fulfilled. With all those generations bearing witness, we settled more deeply into some truths of our history.

When I decided to post here that debrief of the very first class trip, I knew I would have to tell the story of the guy reaching over the railing.

We were exploring in our small groups. My group was in the room with what I called immigration math, huge colorful 3D graphs and interactive maps, showing immigration trends across time. I had designed a day that would echo our day at school: math time in the math room; reading and writing time in the galleries full of photographs; sketching time in a gallery full of the actual objects immigrants had brought with them, candlesticks and prayer books, christening dresses and lockets. Recess time we spent outside, looking for our own relatives on the wall of names, watching the seagulls. All of this was meant to help us feel ourselves mid-harbor, mid-history, mid-melting pot.

Lucy Candib, medical doctor and mother of Addie, was with me there in the math room with our group of four or five kids. Suddenly, we heard the terrible sound of someone’s head hitting the stone floor in the entrance room behind us. A young man from another school had leaned out over the stair railing too far, reaching to a friend, and had tumbled down to the floor below. Lucy was the first person at his side. I saw him on a stretcher, apparently unconscious, as rangers waited for a helicopter to fly him off the island.

All of us, every single one, including me, had to tell that story first, before anything else, when we got home late that night. I had to get past the ghost of that story in order to go back to Ellis Island with kids again. That incident made me tighten my organization for the trip, and recruit kids to be mindful of everyone’s safety. It forced me to think through (again) all the risks teachers take when we leave the classroom with kids, and all the reasons why we should, anyway—because the story of the young man who reached too far was not the only story we all had to tell when we got home, just the first.

Inspired by that woman on the balcony of the Great Hall, imagining her father, I had designed the immigration unit around true immigration stories of family members and friends, people still alive and people known only by the stories still told about them. Kids called uncles in California who knew that stuff; they interviewed their babysitters; they often found family artifacts and brought them in to share. In our work at school, students gathered these stories, distilled them into file card versions to put on a huge timeline stretching around the room, and chose one to write in full and revise for publication.

Always, in any particular class, a good portion of the kids, as many as half, had family stories that linked to Ellis Island–but the assignment didn’t specify that. 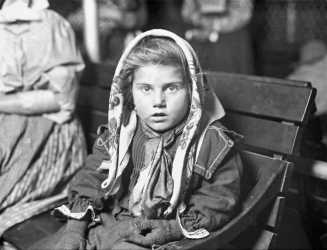 Ellis Island, I asked the kids to make up a fictional story, also. In a room full of giant portraits of immigrants, near the entrance to the Peopling of the Americas exhibit, each student chose a person from one of the photos: boys and girls, women and men, from several continents. 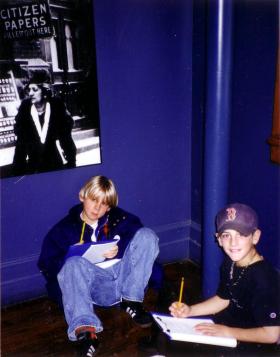 Then, as students moved from section to section in the exhibit, the trip book led them through the corresponding stages of the immigrant experience: a section about saying goodbye, when they left their old homes; a section about finding work; a section about communities of immigrants giving each other comfort and reassurance. After reading some of the text on the walls, looking at the photographs, and listening to recorded accounts on phones placed around the exhibit, each student wrote a journal entry in the voice of his or her chosen person, bearing them through the experience, stage by stage. To the right, Ian Wills and IanTapscott have found a comfortable piece of floor. Below, Mike Costa reads what he’s already written.

Sometimes a kid chose a photograph that could be a stand-in for a great-great-grandmother or grandfather. Sometimes they chose photographs that could be stand-ins for themselves. Stefan Cunha chose a newsboy yelling out across a street–and for all these years since I have remembered the clarity and power of his writing in that situation.

By the time we got back onto the ferry to leave Ellis Island, each of us was like a set of Russian dolls, with other lives nested inside us: the boy who discovered that the immigrants had come to earn their way into this country with unbelievably hard work; the girl who was let through Ellis Island but had to say goodbye to her father; the aunt who could never fully emerge from the trauma, the shadow, of the pogroms; the teenager who became the family’s translator exactly at the age when he wanted independence; the mother with her children held close all around her, hollow-eyed, all of them hungry and hoping to be better fed.

Ellis Island was hard hit by Hurricane Sandy; it’s only gradually being reopened, and I’ve worried that exhibits I treasured, as a teacher, may have been lost. Even before that, security arrangements put in place after the World Trade Center bombings had so lengthened the process of getting onto the island that it no longer worked for us as a day trip. Meanwhile, I had been learning about Blackstone Valley immigration stories, and had discovered the Museum of Work and Culture in Pawtucket, Rhode Island–not at all the same, but fascinating in its own way. The focus of our work in the fall gradually shifted.

It’s fair to say, though, that all my curriculum work afterward was affected by the Ellis Island field trip experiences, and by the thematic study that grew around them. Looking back I can see shifts: in my sense of what is at stake in curriculum choices; in my sense of the huge and complicated realities young adolescent students can stretch to embrace; and in my sense of the importance of combining, carefully and respectfully, both research and imagination.

Below, Adam Curley and I are too excited to sit down, while various parents huddle and talk in the October wind across the harbor.

You’d have a hard time tracking people down with these photographs, from several of the earliest trips–so I decided to just go with them. Thanks so much, to everyone who helped these wonderful field trips happen!