One of my grandfathers died when I was not quite two years old. Photographs show me sober-faced and blonde on his lap—but I can’t consciously remember him. As I was growing up, though, I treasured stories about him, souvenirs, evidence of any kind.

I remember a wall covered with maps which my grandfather had joined together, to show a wide area of many towns centered around the Maine farm he and my grandmother bought in the late 30s, when the world seemed to be falling apart. To make this map collage, he had used USGS topographic maps, first bought (pre-farm) for fishing trips, for knowing the ways of brooks and ponds. Tiled together, the maps gave both a huge view, and detailed views–the paths of the largest rivers, and the wiggles of the tiniest brooks, all on the same wall.

Fast forward many years, during which I grew up in a house with more maps on the walls than pictures, and then married a man whose idea of unpacking, after a move across several states, was to open a box labeled MAPS in the middle of the night, and put up a good selection. The Pisgah National Forest on the bathroom door; a map of the known universe on the wall of the dining alcove. Etc. (Some other wife might have been less pleased.) 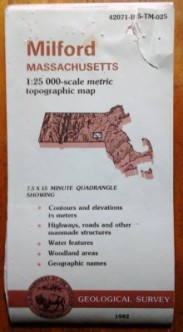 Fast forward again through several other kinds of work, and find me, eventually, teaching classes of kids from towns all over central Massachusetts and the northern corners of Connecticut and Rhode Island. I wanted to help them know where they were all coming from, and use that as a start for thinking about the worlds we didn’t share and the worlds we did.

It was my husband who said, ‟You could get a whole lot of USGS topo maps.” And it was my memory of my grandfather that said: in a classroom, there are really large walls.

For years, then, a new school year officially began for me when we put the maps back up.

I arranged the array of maps, still folded, on a table, and then handed them one by one up to my husband where he stood, somewhat precariously, on a counter below the largest bulletin board space. I folded back the margins to the edge of the map itself; he worked to make the edges of the maps match up as well as possible, so that roads, in red, or brooks, in blue, or town lines, in black, wouldn’t stagger from one map to the next. We marveled again—him from two inches away, perched high; me from the middle of the room—at how much of our relatively urban state was still woods (in green) or swamp (stippled with those funny little swamp symbols.)

Enter students. I usually began, the first week of school, by encouraging kids to compare the map array with the satellite photographs hung nearby. Those big purplish splotches on the maps matched up with cities easily visible from space. The major highways, 9 and 90 and 495 and 290, showed as arteries on the satellite photos also.

But then we zeroed in. If their houses or apartments or condos weren’t too new, and if they didn’t live in downtown Worcester, kids could find on this public document a piece of their private lives: their homes, in the form of tiny black squares. We marked each student’s place with a flag pin specially augmented with page markers, to hold their names.

Here’s most of one year’s map flags:

The kids who lived at the top of the array, up near the ceiling, had to call instructions to a grown-up climber, but the kids down in the nether regions of the Blackstone Valley could stand on a low stool and place their own map flag, sometimes finding the pinprick left by an older brother or sister in a previous year.

Students who lived in city neighborhoods or new houses—or, oftener and oftener, as the years went by, on brand new streets—had to look carefully at nearby streets and intersections, tiny ponds back in the woods, the shapes of hills given away by topographic lines, in order to see and mark where their houses would be. Sometimes it helped to replay the trip home from school: and here we turn left, and that’s where the old drive-in theater is.

Kids whose parents lived in different houses generally chose to mark both. Parents came in during morning sketching, to clarify confusing locations. Other grown-ups wandered by, and pointed out their own landmarks.

As we traced routes between each others’ houses; as we figured out who lived furthest from school, and who closest; as we crossed bridges and followed off-ramps—all of us developed increasing fluency going back and forth between our knowledge of the three dimensional world, and the abstraction of a two dimensional map.

Like a story, a map shows relationships that we didn’t realize before; it also leaves out things we know better than it does. We need the map and the map needs us.

Next post, I think, we use maps to chase rivers. My grandfather would have approved.

1 thought on “Mapping the community”