In a previous post, I described a student named David who decided to “chase the river”–more accurately the series of brooks and ponds and rivers–that carried his backyard runoff to the sea.

Many students after David found their own watershed pathways, working with the classroom set of topographic maps and other resources. Our distribution varied, from year to year, but we always had a fair number of students who lived in the school’s own watershed, the Blackstone River watershed, along with many from the Sudbury, Assabet, Concord and Nashua sections of the Merrimack watershed to the north, a few from the Charles River watershed, to the east, and a few from the Quinnebaug, to the southwest.

Kids had all sorts of adventures following their watershed pathways, naming nameless brooklets and ponds, asking helpful neighbors what they knew, and playing in the mud.

Once, when we were stumped, I made a house call. Marissa lived on the very top of a hill, typically a watershed boundary. According to the map, her front yard would drain into the Sudbury, and her backyard into the Charles. In actual fact, it all went into the street drains, whose outflow ran into a holding pond, whose outflow ran into the Charles. Not for anything would I have missed that rainy afternoon slogging around in rubber boots, peering down through street drains to be sure which way the water was flowing.

Eventually, with the help of other map freaks, I discovered National Geographic’s Topo software, which let a student use a mouse to trace a pathway on a seamless electronic topographic map, then printed for us the annotated map that resulted. So a student could start with the little trickle that ran across the back of her yard, and keep going, without even needing hip waders or bug repellent. (It’s a shame to miss that entirely, though, and most kids got both experiences: on the map and on the ground.) 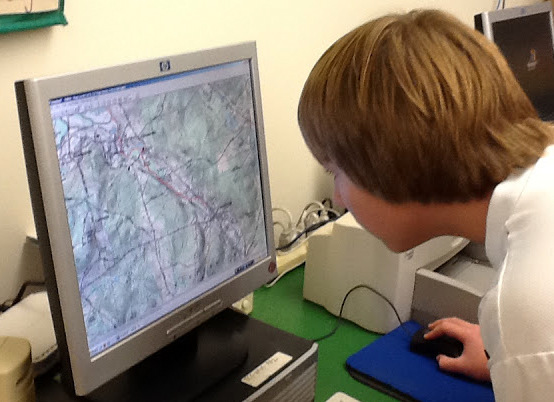 Once a student had done his electronic tracing, he could ask the software for an elevation profile, and see how his pathway was all going downhill, except for a lake or a pond–a long flat stretch–or a place where a hand twitched and the path climbed out of the river briefly. To trace a pathway from brook to pond to river, then flip that path and see it from the side, sliding down the edge of the continent—that was pretty cool. 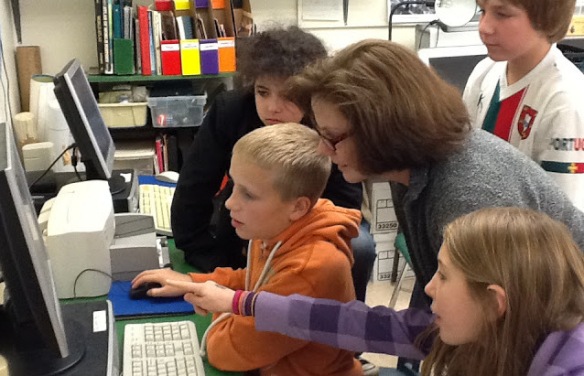 If a small group of kids did this together, squeals and screams might erupt from their corner of the classroom, applauding the kid who just kept “sailing” down Narragansett Bay all the way to the open Atlantic. The group above, working with Terry Lunt, parent volunteer extraordinaire, is following the unfamiliar path of a classmate who lives way out in Charlton.

Kids who shared the lower part of their pathways, what they called “the big river,” could meet together and see, for example, how much area was drained, by all their different routes, to become the power of the Blackstone, harnessed for the mills and re-channeled for the canal that gave the Blackstone Valley so much of its identity.

Then what? The maps and their pathways could be put up in the hall for the rest of the school to see. 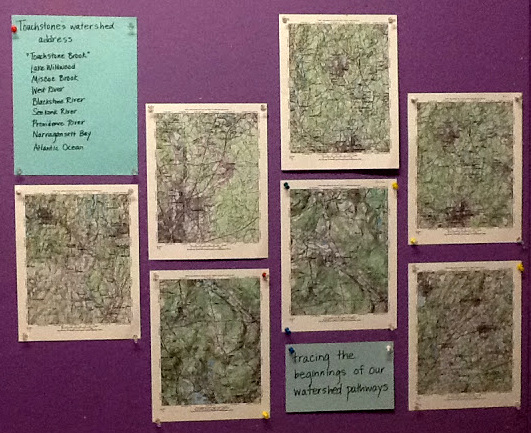 Like a dare to everyone passing by: wherever you live, some story like this belongs to you. You can go find out, and you can get started with a map.

Some years, students created posters to share with each other and parents at a special watershed night. Some years, we were even more ambitious, ridiculously ambitious. At the outset of Touchstone’s Older Student Program–supported by a state arts grant and with the help of a wonderful video consultant, Veda Reilly–Katy Aborn and I worked together to create a multi-part video called Voyage to the Sea. Voyage included documentary sections about topics such as the water cycle and water power, as well as story sections about two teams engaged in a regional competition called The Blackstone Watershed Relay.

In the final chapter of the video story, Bill McHenry, then director of Touchstone’s Extended Day Program, posed as the director of the Watershed Protection Association, the fictitious nonprofit that sponsored the equally fictitious relay. Speaking to students who had become fired-up environmentalists as a result of learning about their watersheds, Bill repeated a quote from Bernie McGurl of the Lackawanna River Association, one of thousands of real-life organizations of people who have gathered together to learn about their watersheds and to protect the quality of the water flowing through them.

Water has a voice. It carries a message that tells those downstream who you are and how you care for the land.

If you want to get started on your own watershed adventure, here’s a good place to begin: http://cfpub.epa.gov/surf/locate/index.cfm

Or you can just put on your boots and head out the door. Don’t forget the map!

4 thoughts on “Chasing the River, Part 2”